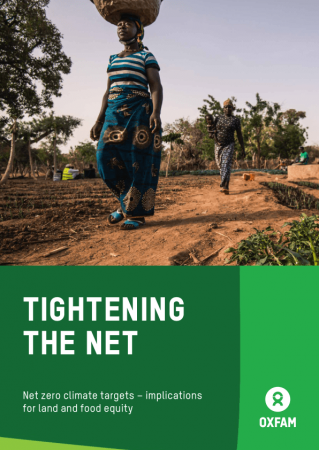 The report highlights the need for companies to cut emissions in their own operations and supply chains first and foremost.

A new briefing paper by Oxfam, Tightening the Net: Net zero climate targets – implications for land and food equity, has warned that current net zero climate targets risk reliance on large areas of land in low-income countries to capture carbon emissions, and therefore allowing the avoidance of emissions reductions by the biggest emitters of carbon.

The report highlights that the ‘net’ aspect of ‘net zero’ poses a risk due to the avenue for governments and corporations to continue business-as-usual while appearing to be taking action, such as by outsourcing carbon reductions/sequestration while delaying their own action to reduce emissions. It also allows avoidance of reduction in emitting behaviours such as the use of coal, oil and gas for electricity and oil for cars; instead allowing focus on other methods to remove carbon from the atmosphere. A focus on carbon removal methods is problematic as current carbon-capture technologies have not yet proven possible to use at scale.

To meet the Paris Agreement targets, the world must collectively cut carbon emissions by almost half by 2030, with the biggest emitters required to make the biggest reductions to meet such a target. However, based on the February 2021 UN NDC synthesis report, we are on track to only have reduced emissions by 1% compared to 2010 levels.

The report emphasizes that stopping deforestation and sustainably restoring and managing lands wherever possible remains an important goal, and one that brings enormous environmental and social benefits. However, in the context of ‘net zero’ emissions, it is not possible for reforestation to meet the combined net zero targets announced by governments and corporations. There is simply not sufficient land that is both suitable for reforestation and not used for other vital uses such as crucial food supplies. Oxfam calculated that the total amount of land required for planned carbon removal could potentially be five times the size of India – the equivalent of the total global expanse of existing farmland.

The report highlights the chance for change at the upcoming COP26 Glasgow Climate Summit in November, where there is opportunity for definitive cuts to carbon to be agreed for 2030 to prevent the current risks and loopholes in current climate goals.