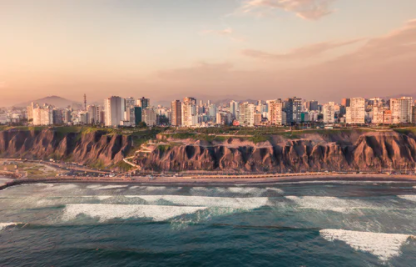 Peru is a country vulnerable to climate change, where 67% of disasters are related to climate phenomena, and 5.5 million citizens are exposed to intense precipitation, 2.6 million to drought and 5.6 million to extreme cold events (UNDP 2014).

Two important events in the past month have highlighted Peru’s commitment, ambition and leadership on climate action and NbS.

First, as a “Vanguard Country” for the Natural Environment Action Track of the Global Commission on Adaptation, Peru played a key role in the Climate Adaptation Summit on January 2021. In this global event, Peru shared that 35% (32 out of 92) of its Climate Change Adaptation Measures have been conceptually classified as NbS or potential NbS. The NbSI Peru team supported the Ministry of Environment on this analysis, which also shows that almost 60% of the 32 NbS/potential adaptation measures address environmental degradation and biodiversity loss, 53% economic and social development, and 12.5% water security. Regarding the specific types of ecosystem-based approaches involved, 34% of the 32 NbS/potential adaptation measures use natural infrastructure, 25% ecosystem-based disaster risk reduction, 16% ecosystem-based adaptation and 16% ecosystem-based management. The country will now focus efforts on implementing these measures, using a robust operational framework based on the Global Standard for NbS developed by the IUCN.

Second, on February 11th the Ministry of Environment of Peru launched the process to update the National Climate Change Strategy (ENCC) towards 2050. This policy instrument will present Peru’s long-term vision and strategy on climate change action, and place emphasis on the implementation of mitigation and adaptation measures. The ENCC 2050 strategy will incorporate existing climate regulations, instruments and platforms, and be aligned with the country’s carbon neutrality (net zero) goals, National Adaptation Plan, and the updated NDC target of 40% emissions reduction. Gabriel Quijandría, Minister of Environment of Peru, stated that “the ENCC 2050 will be the policy that transforms and strengthens the country’s climate action towards sustainable development”, and that this year we celebrate Peru’s Bicentenary by starting to build the future we want by 2050. The construction process of this 2050 vision for Peru will ensure inclusive and effective participation of multiple stakeholders, prioritize the integration of national and subnational needs and priorities, consider existing government processes and instruments, and be based on robust scientific evidence.

The launch of Peru’s ENCC 2050 included a host of perspectives and recommendations by international experts and national decision-makers. Laurence Tubiana, CEO of the European Climate Foundation, shared that a long-term strategy aligned with achieving the goal of net zero by 2050 requires the active participation of society, and that citizens need to understand and partake in the changes needed to build such a net zero society. Andrea Meza, Minister of Environment and Energy of Costa Rica, reflecting on Costa Rica’s long-term strategy, stated that decisions are not being saved for later, but rather that the country has set clear long-term targets that also require policy packages in the short- and medium-term (2030). Javier Abugattás, President of the Directive Advisory of the National Center of Strategic Planning (CEPLAN), highlighted the importance of aligning the ENCC 2050 with national planning systems, in particular in the National Strategic Plan for Long-term Development, which also has a 2050 vision. Finally, Alberto de Belaunde, President of the Special Commission on Climate Change in the Peruvian Congress, stated that the ENCC 2050 will secure targets beyond political terms, and that we must ensure climate action has a role in the COVID-19 economic recovery and underscores our competitivity by engaging the private sector.

One of the key topics discussed was the economic benefits of strategic climate action in Peru. According to the IDB and OECD, investing in carbon neutrality provides 5-to-1 benefits, in comparison to business as usual, and will generate 15 million jobs in Latin America (22 million new jobs minus the 7 million removed). In addition, though net zero growth will require an additional investment of about $99 billion USD by 2050, it will generate greater economic benefits of $161 billion USD by 2050. The ENCC 2050 aims to set ambitious targets with a multi-sector, multi-actor and multi-level approach to ensure the participation of Peruvian society at large, allowing Peru to navigate opportunities towards transformational change.

This article was written by Nicole Chabeneix from the NbS Peru team.