National mitigation potential from natural climate solutions in the tropics 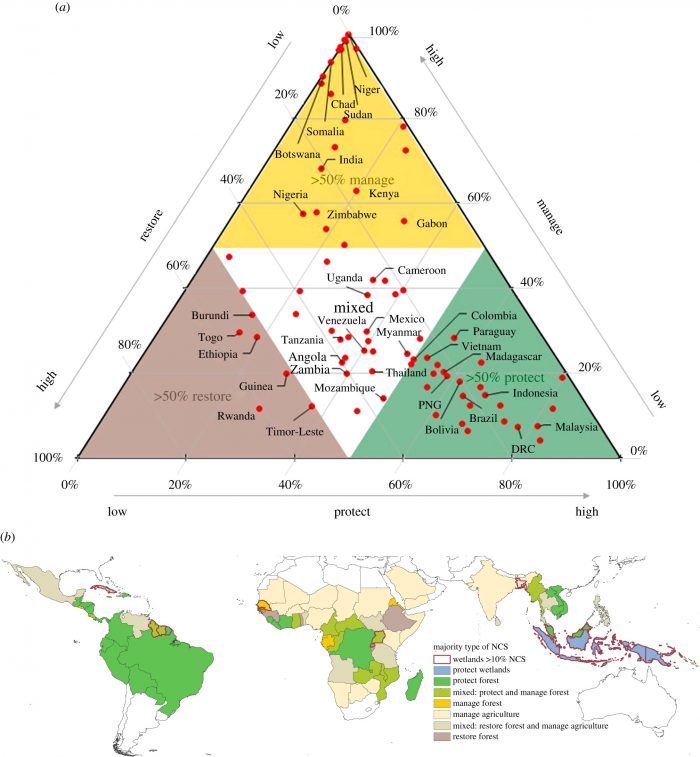 Countries are classified into one of three groups (‘protect,’ ‘manage’ or ‘restore’) depending on the pathway type contributing the majority (greater than 50%) of mitigation potential—or into a fourth group (‘mixed’) if no pathway type contributed the majority (a). For example, Zambia is ‘mixed’ (40% of total NCS are ‘protect’ pathways, 40% ‘restore’ and 20% ‘manage’). The 10 countries with the largest total NCS potential in each group are identified by name in (a). NCS countries are further classified into seven groups based on the cover type (forest, agriculture, wetland) of pathways contributing the most mitigation potential (b). Red outlines identify countries where greater than 10% of NCS is from wetland pathways that deliver multiple ecosystem services.

Griscom et al. 2020 Philosophical Transactions of the Royal Society B

This paper looks at the potential for natural climate solutions (NCS; a type of nature-based solution) for mitigating climate change in 79 tropical countries. 12 different NCS pathways were defined, split broadly into protection, management and restoration across multiple habitat types (savannahs, farmland, wetland and forests). Overall, the study found that cost-competitive (<US$100/tonne) NCS in the tropical countries studied had potential for sequestering 6.56 billion tonnes CO2e/yr between 2030 and 2050. In 22 of the countries studied, the NCS potential was larger than recent historic national emissions, meaning by implementing NCS at scale these countries could become net carbon sinks.

The NCS pathway with the largest mitigation potential was avoidance of forest conversion, at 1.2 billion tonnes CO2e/yr, more than twice as high as the second largest pathway, reforestation. This estimate for reforestation was 48% below the previous estimate by the same lead author in 2017. More land is needed for reforestation than forest protection to achieve the same amount of CO2 drawdown; for example, tropical reforestation typically sequesters about 3 tonnes of C/ha/yr, whilst avoiding tropical forest conversion will typically avoid emissions of about 100 tonnes C/ha/yr. NCS pathways focussed around management provide lower carbon benefits but involve fewer trade-offs; for example, reduced impact logging can reduce emissions whilst maintaining or increasing timber yields.

The paper provides a map showing the NCS pathway which could contribute the most to mitigation in each tropical country. For example, protecting forests holds more than 50% of mitigation potential in Malaysia, the Democratic Republic of Congo and Brazil, whilst in Ethiopia and Guinea forest restoration holds the majority. The authors conclude with notes on opportunities for financing NCS, highlighting that a small set of tropical countries hold the majority of opportunity for NCS and have potential to implement this with respect to governance and financial capacity (namely: Indonesia, Brazil, India, Malaysia, Mexico, and Colombia) and that international funding is needed to realise this potential.