In May, some of the NBSI team visited the Lye Valley in Headington, Oxford, an ancient verdant landscape. The visited was guided by Judy Webb, a member of the Friends of Lye Valley and an ecologist with a special interest in rare wetland plants, as well as flies and bees, who coordinates management and restoration work with local volunteers to preserve important habitats in Oxfordshire.

An Ancient and rare habitat in the middle of Oxford

The Lye Valley is fed by groundwater from a limestone formation, a remnant of coral reefs 160 million years ago. This generates lime-rich springs, naturally low in nutrients and high in calcium carbonate, which in turn supports a unique flora across1,5 hectares of alkaline spring fen. This fen represents a very rare habitat of which only 19 hectares remain in England and includes over 20 rare plant species in Oxfordshire, 14 of which are on the England Red List. The fen is registered as a Site of Special Scientific Interest (SSSI) and forms a whole ecosystem with two other sites nearby, namely the Rock Edge – also a SSSI and a remnant of the limestone quarries with rocks about 150 millions years old – and the Warren Meadow. 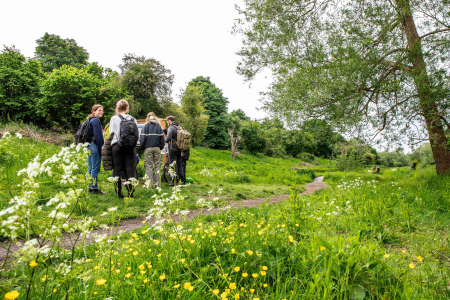 Uncontrolled development is a serious threat for the Fen

Maintaining such a rare habitat within the city is very challenging. First, the nearby development and built infrastructure pose a significant threat. Through the process of urbanization, the fen valley has been used as a storm drain, which is eroding the peatland. High water flows feeding into the central Lye Brook (from road run-off and other sources of effluents, including sewage) lead to erosion of fen peat and gouging out the channel in the centre of the valley, reducing the water table, and drying out the surrounding fen. Furthermore, the water itself is harmful to the fen, as it contains little calcium, and high concentrations of pollutants and organic matter.

Over time, grazers from Mammoths, wild horse, European elk aurochs and red deer, and subsequently by horses and cows of farmers kept the grass and reeds short, sustaining the fen habitat. This is no longer possible, given litter or broken glass that threaten the cattle’s health, and restrictions in bringing grazers within a small urban space. In addition, visitors, particularly during COVID-19 lockdown measures, trample on delicate habitat, or start bonfires, which destroys patches of the wetland. 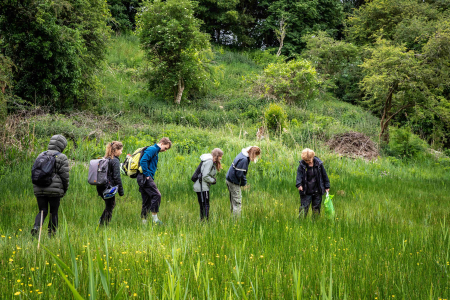 Saving the Fen and its Nature-based Solutions

The fen is not only a rare habitat, but also an ecosystem with a plurality of benefits for species and humans. Importantly, there’s about 1.5 to 2 meters of peat in this fen and a recent study estimated that the fen habitat in just the SSSI north section contains 284 tons of carbon (Darcey Hadlar, 2021). To sustain these services however, the fen needs to stay wet, not only for the plants’ health, but also for storing the carbon in the long run. This is because, dry peat oxidizes and releases carbon. Climate change is further impacting this by changing precipitation regimes (drier in the summer, wetter in the winter) and by so the likelihood of the fen drying in the summer.

Various actions are currently are currently taken to try to save the fen, funded by the Berkshire, Buckinghamshire and Oxfordshire Wildlife Trust (BBOWT) in the ‘Wild Oxford’ project (2014-2019). Subsequently restoration has been carried on by the volunteers of the Friends of Lye Valley group in combination with Oxford City council Countryside Service. Woven hazel/willow barriers now keep people from the most sensitive sections, and leaky dams have been built to control the storm water flow coming into the fen from built infrastructure. These human-made dams mimic beaver dams. The hope is that slowing water flows, the water table will raise in the brook, ensuring the cleaner, high calcium content water flowing from the sides of the fen will re-wet the dried peat areas of fen next to the brook channel. The volunteers are also raking and cutting the reeds and the grass to replace the grazing action which used to maintain the habitat.

All those actions are essential to sustaining the fen and the services it provides for biodiversity, carbon storage and local climate, as well as providing opportunities for recreation and education. As shown by here for the Lye Valley Fen, effective Nature-based Solutions rely on a precious interplay between people and nature.

Prior to COP27 the United States (US) Biden-Harris Administration released a Nature-Based Solutions Roadmap; an outline of strategic recommendations for utilizing nature-based solutions (NbS) to [...] Read more January 25, 2023